There’s a lot that could be said about Taika Waititi being hired at this stage of the MCU. Is it a risk to give a giant special effects blockbuster property like Thor to a director known for off-kilter, low-budget comedies? Is it merely a cynical move in an attempt to mimic the quirkiness of the hugely successful Guardians Of The Galaxy films? Can a unique creative tone even shine through within the confines of the strict Marvel model? And does Waititi’s brand of humour even translate to the big-budget world of EXCEPT IT TOTALLY FUCKING DOES AND YOU CAN FORGET ALL THESE THINGS BECAUSE THIS FILM IS SO MUCH FUN.


After two instalments struggling to make the cosmic Viking fit in with the more grounded stories of his Avenger colleagues, Thor has finally found his place in the Marvel Cinematic Universe, and it's in comedy. This is a film that succeeds in making you laugh first and foremost at every turn. The overarching plot is that Cate Blanchett’s supremely powerful Hela is threatening to rule and destroy Asgard while Thor has crash-landed, hammerless, on a remote junk planet that enjoys giant gladiatorial battles for sport. But all of this is essentially background noise to the film’s main driver: practically every scene in this movie is designed to be funny.

And this isn’t in the usual Marvel way of underscoring an action beat with a glib one-liner, but is in actually taking time to be silly, to have whole stretches of dialogue that revolve around petty bickering, or awkward conversational slip-ups and to focus on the mundane in the middle of the epic. It’s in real character-driven comedy where every joke and moment always links back to the defining quality of the person at its centre.

It’s easy to see that this is Taika Waititi’s doing. His name might not be among the list of three people credited with writing this film, but from his own work voicing one of the funniest CG characters I can remember (the incredibly down-to-earth and understating rock warrior Korg) to the presence of Hunt For The Wilderpeople’s Paula as a stern, stoic, blood-lusting guard, it’s clear that Taika Waititi has guided the tone of this film every step of the way and it’s in this that the film can easily be seen as one of the MCU’s very best instalments. Just like Iron Man 3, there’s a clear creative voice that sets it apart enough from the usual formula to truly stand out from the crowded genre. 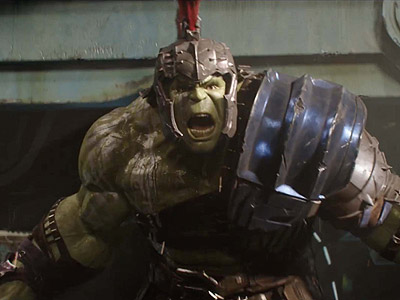 You can tell because Hulk wears a funny hat in this one.


But that’s not to say that Waititi deserves sole credit for its success. Part of the reason that Thor has finally found his feet with this film is because Chris Hemsworth is finally given the chance to stretch comedy muscles as well as muscley muscles, in a way that we have only ever caught glimpses of before. It helps that the God Of Thunder gets a slight rewrite here to go along with his fresh, new reboot haircut too (just to ‘hammer’ the point home).

This is a truly goofy Thor, one that is funny not, as in previous MCU films, because he has his pomposity punctured and undermined, but because he is dorky. He wants to act cool but doesn’t know how to. He tries to show off and he ends up falling over. When he engages in frequent battles of one-upmanship with the Hulk, you can imagine that ‘old Thor’ would have become angry and acted out tempestuously as is in his name-sake nature, but ‘new Thor’ grits his teeth and tries to smile through polite protestation. It works because Thor’s main arc has always been to let go of his ego and learn more humility and humanity, but mostly it works because Chris Hemsworth is so fucking funny, selling this self-conscious version of the Avenger with brilliant delivery and timing that elevates an already great script.

As is often the case with any ensemble action sequel that feels like it has to pay service to all of the characters and elements it has picked up along the way, Thor: Ragnarok occasionally feels like it is doing too much, with secondary characters getting short thrift as a result. A plot-setting sequence with Benedict Cumberbatch’s Doctor Strange, for example, should be a crossover moment that induces grins and goosebumps, but ultimately isn’t anywhere near as enjoyable as when Thor is just out having his own adventure. 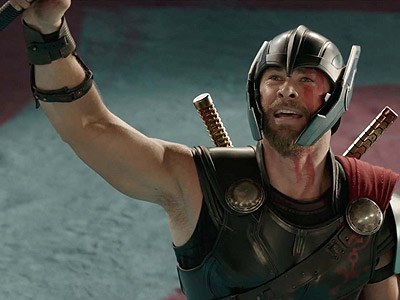 
Meanwhile Idris Elba’s Heimdall is given a shorthand hero story, Karl Urban’s Skurge gets occasional great moments but is ultimately an underwritten flip-flopping character, Tessa Thompson’s Valkyrie is basically just layering on more strength and sass and it seems Jeff Goldbum was cast to simply play Jeff Goldblum (which is easily the best thing to ever do with Jeff Goldblum). Only Mark Ruffalo gets to expand his character/s further, playing a more settled, engaging Hulk with an emotion range that extends beyond just ‘smash’, and a bewildered Banner comically out of his depth in human form. Even Loki – as great as Tom Hiddleston still is in the role – is basically just doing more Loki.

All of which is ok. Together, the myriad elements, no matter how simplistic, form a cohesive whole that knows how to emphasise its strengths to be the best film it can be. Sadly, this also means that Cate Blanchett is somewhat wasted in full undefeatable villain mode, forced to play high camp in the straightest plot thread of the film while almost everyone else onscreen is having fun undercutting each other. In any other MCU movie, she might have been remembered as a truly iconic formidable foe, but here she loses out to how strong the film is when it’s having fun with her not on screen. 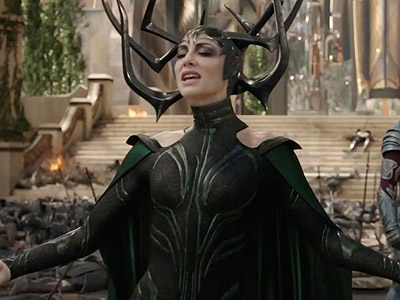 Yep, EVEN MORE fun than this.


Overall though, this is a film comprised of fantastic moments that you’ll want to remember and repeat long after it’s over, but you won’t be able to because there are just so many. Retelling forgotten gags is to this film what picking apart nerd spots and flaws are to every other film in the MCU back catalogue. There are superb lines, great physical comedy, hilarious moments of confusion, instances of questioning basic actions that continually undermine the stakes that are at play, and without a doubt the best surprise cameos of any comic-book movie to date. To give you some idea, there is a moment where Thor recounts an anecdote from his childhood with Loki that I found so funny I remembered it and laughed again every 10 minutes for the rest of the film, and I guarantee that happened for almost everyone else at my screening but with different jokes.

So yes. Waititi’s unique creative tone can shine through the Marvel model, and the MCU is undoubtedly a far better place for it. If anything, after this exceptionally inventive instalment, it’s going to be difficult to not see any future return to the po-faced straight-up superhero action films of Phase 1 as a step-back to a lazy formula. Which means that, despite being mega-excited this time last week, I am now genuinely concerned for Black Panther.

More:  Thor Ragnarok  Thor  Taika Waititi  Chris Hemsworth  Mark Ruffalo  Marvel  Cate Blanchett  Tom Hiddleston
Follow us on Twitter @The_Shiznit for more fun features, film reviews and occasional commentary on what the best type of crisps are.
We are using Patreon to cover our hosting fees. So please consider chucking a few digital pennies our way by clicking on this link. Thanks!