I have it. The secret of comedy. That which even the greats could not bottle and sell. Get a comedy actor guy, right, and stick him in a film with a serious actor guy, right, but then the SERIOUS actor guy says funny things too. See, Spy! Ride Along! 21 Jump Street! And now ... oh, wait.


Sorry, bit of a dick move. Daddy's Home is perfectly OK. It has a strong, simple central conflict, some nice running gags and a few good setups. But unlike the recent examples above, the serious actor is the disruptive force and gets the better lines, so much so that the comedian looks tepid.

Yes, I just called Mark Wahlberg a serious actor. Bloke's got an Oscar nomination, you know. So in he breezes, Dusty the ex-husband, upsetting Brad's (Will Ferrell) relationship with Dusty's ex-wife (Linda Cardellini) and children, showing him up by being buff and cool and, obviously, the kids' real dad. Brad's a loving and committed stepdad but the kids haven't warmed to him yet; Dusty's the deadbeat dad who was always around for the fun stuff but could never be bothered with the hard yards. 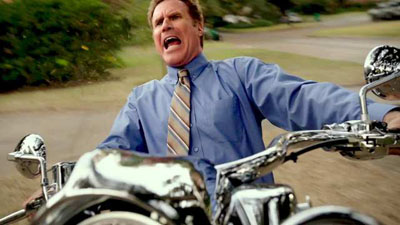 "OK Will, just riff a bit on the shouting, have fun with it."


Ferrell's a sort of funny straight man here. He's done this a bit before (most notably when he was last on screen with Wahlberg in The Other Guys) and the role constrains him a bit. The best bits of Ferrell are what you get when you let him off the leash a little; frequently they're the little exhortations to himself, or quiet expressions of dismay or impotent acquiescence that you guess he improvised. That's where he gets his big laughs; the ones that drown out the other actor's next line. But here there aren't many, and it feels like he stuck to the script.

With Wahlberg you think you know exactly what you're getting, but he delivers a nice surprise. Dusty is passive-aggressive rather than just aggressive, a good choice on Marky's part (though the script does a lot of the work for him). He undermines Brad constantly while pretending he doesn't realise he's doing it; the best running joke, though it defies any and all narrative reason, is his moving black handyman Griff (Hannibal Buress) into the house and constantly hinting that Brad is racist. Buress, a standup best known recently for outing Bill Cosby as an alleged rapist on stage, isn't someone I realised was much on the radar for Hollywood goofy-friend roles, but it's a welcome development. He is here entirely to furnish the one joke, it's true, but he harvests a lot of laughs himself besides. 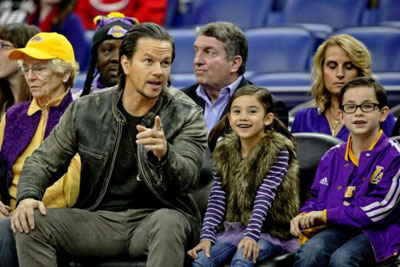 "Hey, did I ever tell you guys about the time I beat a man half to death?"


Meanwhile Thomas Haden Church as Brad's boss really goes to town, a sort of Swiss Toni via Sam Shepard. But it's in these scenes that it's most apparent Ferrell's been misused: having him the only one in the room who can see how inappropriate the old weirdo is being – the Tim from The Office – is a resource ill-distributed.

It heads exactly where you think it's heading, but really picks up the pace towards the end, delivering a stirring resolution scene and a great kiss-off cameo. You leave energised because of this, but once out in the cold you realise you've been sold a slight dummy. There's a lot of currency in actors showing they can laugh at themselves by mimicking their serious personas, but the joke itself is limited, and it needs a good comic actor to clown it up around the edges to demonstrate the contrast. Funnyman/straight man, except the straight man's playing it so straight it's funny. Daddy's Home doesn't quite know who's who, and Will Ferrell isn't on sharp enough form to make it obvious.

More:  Daddys Home  Sean Anders  Will Ferrell  Mark Wahlberg  Linda Cardellini  Hannibal Buress  Thomas Haden Church  Bobby Cannavale  Scarlett Estevez  Owen Vaccaro
Follow us on Twitter @The_Shiznit for more fun features, film reviews and occasional commentary on what the best type of crisps are.
We are using Patreon to cover our hosting fees. So please consider chucking a few digital pennies our way by clicking on this link. Thanks!