As with every year, the Best Actor Oscar of 2013 will no doubt be given to the actor who has portrayed the greatest character affliction. So let's tally up: Bradley Cooper had mood swings, Joaquin Phoenix had um... something, Daniel Day-Lewis had... a beard? And Hugh Jackman sang. A lot. Lucky then for Denzel Washington who plays an alcoholic. Also, pity poor John Hawkes for not even getting nommed.

It's a surprise to think that, of all the movies giving Oscar-nominated performances this year, Flight is really the only showcase film for just one person 'going it alone' rather than being part of an ensemble. Playing an alcoholic pilot who miraculously crash-lands a plane with minimum loss of life only to then have his judgement called into question at the resultant inquiry, Washington layers the film with his trademark authenticity and gravitas. Isn't that just soooo Denzel? 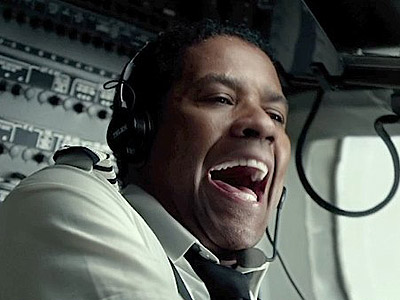 
Despite the film starting with the spectacular plane crash in question - a long, tense and then exhilarating sequence that could easily be the most thrilling moment in all of this year's Academy hopefuls - the film is very much a character study. Washington's implausibly named Whip Whitaker makes for a realistic substance abuser, in denial about his reliance on alcohol and recreational drugs, and often seeming in control of himself despite often being quite shitfaced. And then there are other more debauched episodes of recklessness resulting in pants-down, dribbling moments of humiliation jut to remind us all that alcoholism IS a bad thing. And rightfully so, the film can't have everyone leaving the cinema thinking that they can land a Boeing 747 after a few swift pints.

It’s just a shame that, after such an incredible opener, the film settles into middling, maudlin territory with very few peaks. While Don Cheadle's lawyer attempts to play down Whip's blood toxicology report and Kelly Reilly's recovering heroine addict befriends the stubborn pilot, we have a film that is, for a long time, concerned only with Whip's denial - which is a bit of a plot-staller. 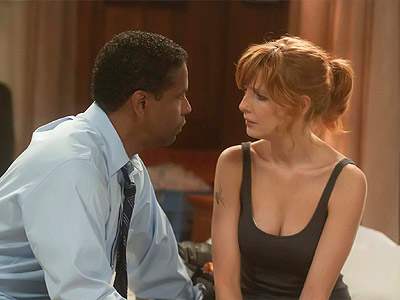 Let's just sit here and think it through. Properly.


In fact, save for the climactic inquest itself, the only highlights that occur after the crash are when John Goodman's equally implausibly named Harling Mays lights up the screen. As Whip's drug-supplying friend, Goodman brings huge laughs and some much-needed energy to the film, acting like an irresponsible and inappropriate Walter Sobchak from The Big Lebowski. The only irritating aspect of his character is that, both times he appears, Zemeckis chooses to introduce him with the no-brainer musical cue Sympathy For The Devil.

But this is an annoying element throughout, with every important scene accompanied by a recognisable song that's really too on the nose. When, during moments of substance abuse, you hear songs like Under The Bridge, Gimme Shelter and With A Little Help From My Friends, it's clear that not much thought has gone into the soundtrack. You can imagine that every time Denzel eyes up a hotel bar, Zemeckis puts another coin in a jukebox that's stuck permanently on Now That's What I Call Addiction.

But then, the too-obvious song choices are fitting for a film that always looked to be just dependable and solid. Even the far-too-neat ending smacks of a Hollywood film that conveys alcoholism by numbers rather than push any boundaries. And then there's Denzel’s performance, which – as brilliant as it is – hardly seems awards-worthy when you know that he is this good all the time. Don't get me wrong - the man deserves a hundred Oscars, but I'm just not sure I want the Academy Award to go to an actor who puts as much effort into this role as he did for Unstoppable. The man needs to learn to pace himself.

More:  Flight  Robert Zemeckis  Denzel Washington
Follow us on Twitter @The_Shiznit for more fun features, film reviews and occasional commentary on what the best type of crisps are.
We are using Patreon to cover our hosting fees. So please consider chucking a few digital pennies our way by clicking on this link. Thanks!