It shouldn't be this hard. It shouldn't be a chore to watch a film critics have described as "phenomenal", "indelible" and "masterly". The Lincoln awards screener disc - 'For Your Consideration in all categories', in case you hadn't guessed – has been sitting on a pile of DVDs this big for about a week now, and I've been avoiding it for just as long. The other day, I literally chose to watch Lockout* over Lincoln. That's the extent of my disinterest. However, circumstances conspired to make it today's sole viewing option – one snow-storm and one Netflix outage later, and Steven Spielberg's latest made its way onto the TV by default. Clearly the members of the Academy didn't share my apathy.


Here's the thing about Lincoln: it is pointless me reviewing a film this worthy. I am not qualified. Those three stars up there are meaningless. I might as well have rated it one apple, a thumbs up and a sad panda emoticon. I have the attention span of a squirrel and my tolerance for political biopics – ones set mainly in dusty rooms where great men ponder, point at bits of important paper and stroke their beards – is near zero. The professional in me ploughed forward, determined to enjoy Lincoln and its scenes of studied contemplation and historical significance, but I couldn't engage. There is clearly only one explanation: Lincoln is probably a fantastic film, but I'm just a terrible person. 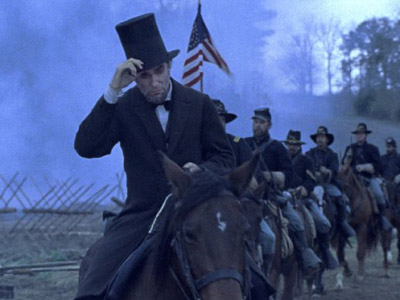 I probably shouldn't even be allowed to have internet access.


Only a true troglodyte could fail to appreciate acting of this calibre. Right? Daniel Day-Lewis' dedication to his craft is admirable; to channel Lincoln's vibe, he stayed in character off set – even if co-star Jared Harris confessed Day-Lewis would grill him about Mad Men ("which he couldn't know about, because television hadn't been invented then"). Even at Lincoln's most portentous, Day-Lewis refuses to grandstand, expertly underplaying a role that practically demands a platform. I guess he brings the best out of his supporting cast, which numbers every respectable, middle-aged white male in Hollywood with an SAG card in their wallet. Sally Field and Tommy Lee Jones wouldn't have been nominated for Oscars by association, right? Even if it may appear to idiots like me that they're merely playing to type and basking in the assumed glow of an awards-worthy project.

While we're on the topic of award nominations, I'm clearly an imbecile for thinking that a succession of nicely decorated, sparsely lit rooms shouldn't qualify for a Best Production Design Oscar, or that the bloated, 150-minute narrative, is in no way more worthy of a Best Editing nod than a sprawling sci-fi epic like, say, Cloud Atlas, or The Avengers. Perish the thought! Such fustiness is core to Lincoln's aesthetic, granted, but it feels like visual anaesthesia at times: if it weren't for the sheer starriness of the cast hidden under the bad wigs and lofty hats, it'd feel like a mini-series you might find on The History Channel. To me, anyway. The guy wearing the Muppet pyjamas. 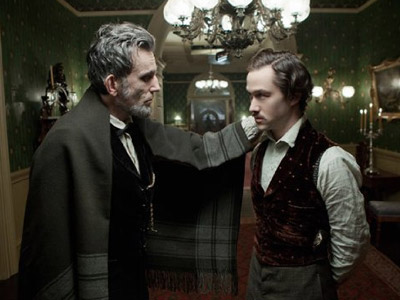 I did like the daddy issues, though. They were new.


Lincoln has all the excitement of a slightly-above-average courtroom drama, the tension coming to a head when the House of Representatives (read: busted old white dudes) vote 'yay' or 'nay' against the Constitutional amendment to abolish slavery. Given that the result was always going to be something of a foregone conclusion – beating Titanic by 48 years in the 'we know what happens in the end' stakes – it still feels like a rather drab conclusion to this uneducated swine. There is little evidence of the horrors of slavery here, and certainly nothing like the satisfaction of seeing a black man celebrate his newfound freedom as you'll find in that populist nonsense, Django Unchained.

Those invested in the annals of history may find it illuminating; those who consider Oscar's word to be the last will revel in its self-importance. To me, however, Lincoln is just okay: a well-acted, nicely shot, perfectly watchable biopic that I assume has one hundred times more resonance when viewed from the opposite of the Atlantic. But then, I did give Transformers: Revenge Of The Fallen four stars, so what do I know?

* It was the absolute worst.

More:  Lincoln  Steven Spielberg  Daniel Day-Lewis  Sally Field  Joseph Gordon-Levitt  Tommy Lee Jones
Follow us on Twitter @The_Shiznit for more fun features, film reviews and occasional commentary on what the best type of crisps are.
We are using Patreon to cover our hosting fees. So please consider chucking a few digital pennies our way by clicking on this link. Thanks!