Mission: Impossible is the only movie series that's got the measure of franchise fatigue. Some elements remain omnipresent - the star, the stunts, the self-destruction - but with each new M:I instalment helmed by a new director bringing a fresh flavour, it has Bond beat in terms of shelf-life. Rogue Nation, however, is the first entry in the franchise to play it relatively safe, offering a slick and entertaining adventure but one that doesn't feel different enough from Ghost Protocol - perhaps inevitably, given its predecessor's lofty ambitions, Rogue Nation couldn't ever hope to hit the same heights.


You can't say it isn't ballsy. Unlike Brad Bird's movie, which had the mile-high Burj Khalifa set-piece skewered through its middle as a centerpiece, Christopher McQuarrie's mission dispenses with its stand-out stunt in the first five minutes, leaving the rest of Rogue Nation an open book. The movie sees the emergence of an "anti-IMF" terror group called The Syndicate aka the SPECTRE haunting Ethan Hunt's James Bond. Unfortunately, the idea of a radicalised rogue nation of disavowed former secret agents acting in their own selfish interests is not explored in any meaningful way, and The Syndicate is seemingly populated by identikit goons in motorcycle helmets, led by a shady figure who speaks in strangled whispers and has a penchant for terminating the employment of sub-par henchmen with bullets. Evil business as usual. 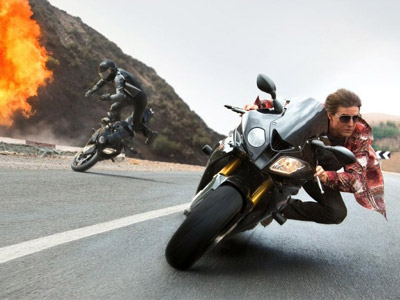 
Rogue Nation doesn't seem to have learned any lessons from any of the previous movies, in that it still has a villain problem. Sean Harris - you know, the "I fucking love rocks!" guy from Prometheus - is ineffective as Solomon Lane, a menacing but ultimately forgettable bad guy who lacks a clear plan and whose intentions are obfuscated from the start by a series of macguffins and red herrings. Hunt, on the other hand, never really gets personally invested in proceedings - he's the same guy at the movie's end that he is at its beginning. Meanwhile, the sub-plot of the IMF being dissolved and Hunt going rogue feels like a pretty tired trope: after Ethan Hunt and James Bond, are there any spies left who do play by the rules?

McQuarrie does introduce intriguing concepts into the mix that are left to simmer and eventually evaporate. Alec Baldwin's cookie-cutter CIA douchebag posits the suggestion that the IMF have survived on luck in the past, and that Hunt is a gambler, but you don't ever feel like Ethan's winning streak is in danger of ending. Rebecca Ferguson's character Ilsa is an interesting addition; she's essentially Ethan's equal but there's no time to give the pair room to explore their similarities. There's a few nice connections to previous missions ("This is the Kremlin before IMF... this is the Kremlin after IMF"), including Baldwin's character revealing a connection to the infamous heist in the first movie, but really, there is very little progression or escalation to speak of. This is a franchise where action not character propels the story, and Rogue Nation more than any other mission feels like a string of set-pieces that lack a satisfying throughline.

But what set-pieces: as Tom and his insurers can testify, they are to die for. Rogue Nation's action sequences are uniformly excellent: the opening plane stunt is mind-bogglingly brilliant (if you hadn't seen the clips all over the internet of it being filmed, you'd assume it was fake); there's a bends-inducing underwater raid that'll test your lung capacity; a bracing motorcycle chase leaves skidmarks on the memories of John Woo's M:I-2; there's even an opera scene, with ass-kicking set to the strains of Nessun Dorma, the closest Mission: Impossible has ever come to achieving Bond-age - all tenors, tuxes and terrorism. 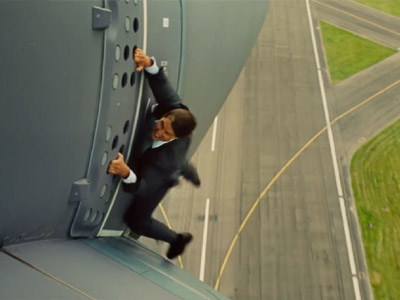 I hope someone said "Tom, you're plane crazy!" afterwards.


The movie's fuse stays lit for a good 90 minutes, but sadly it fizzles out come the disappointing climax in an extended London sequence that feels hastily cobbled together (McQuarrie has openly admitted the movie didn't have an ending when shooting started, and it shows). Admirably, it opts out of the action oneupmanship and finally puts something personal at its centre, but it feels fudged and it's a comedown after the adrenaline rush of previous sequences.

Cruise lights up the rest of the movie with his gargantuan star power and Simon Pegg once again adeptly provides comic relief, but Jeremy Renner is sidelined with an office job (screwed out of action even worse than Hawkeye) and Ving Rhames is stuck behind a computer (every time Luther is called upon to run anywhere, the camera cuts away for reasons that become obvious once you clock his middle-aged spread). Time and time again, Rogue Nation attempts to reinforce the concept of togetherness and teamwork but it rings a little hollow when it's just the guys who have returned - the absence of Ghost Protocol's Paula Patton is keenly felt. Rebecca Ferguson's character is subjected to a leering camera more than once - she even has a specific sideboob shot that's easily the lecherous equal of Alice Eve's Star Trek bra flash in terms of gratuity - so it's hard to shake the feeling that the Mission: Impossible franchise has a woman problem, even if it does reignite Jurassic World's non-entity controversy regarding the role of high heels in action movies.

That said, you can't see Rogue Nation being the subject of too many outraged thinkpieces - in general, it delivers exactly what it promises: action, humour, adventure and Tom Cruise risking his life. Never less than entertaining, Rogue Nation ticks all the boxes but leaves little in the way of legacy. If the franchise is to continue feeling fresh for future instalments, it needs to get radical - hell, it could do with going rogue itself.

More:  Mission Impossible  Mission Impossible Rogue Nation  Christopher McQuarrie  Tom Cruise  Simon Pegg  Jeremy Renner
Follow us on Twitter @The_Shiznit for more fun features, film reviews and occasional commentary on what the best type of crisps are.
We are using Patreon to cover our hosting fees. So please consider chucking a few digital pennies our way by clicking on this link. Thanks!