Review: Black Widow adds shades of grey to the most interesting Avenger

People sure like to bitch about Marvel movies, huh? You've got the usual Film Twitter snobs, writing them off as "films for children". You've got the hard nerd right, who never met a female character they couldn't belittle. You've got the cinema purists, claiming they represent everything wrong with cinema and that Disney are sounding the death knell for the industry. We are now, what, 24 movies into the Marvel Cinematic Universe (I'm not checking, I refuse to check) and it's never been easier to write a review of a Marvel movie - just reapply the same argument you did on the previous 23 films, file copy, commence smugness. People like to say the Marvel production line creates "cookie-cutter" movies, like that's somehow a bad thing. What, you don't like fucking cookies now? Enjoy your gluten-free artisanal crackers you tedious bores, because Black Widow is a triple-chocolate chunk cookie of a movie and it goes down real easy.


The usual criticism lobbed at Marvel movies - "They only exist to set up the next movie" - does not apply at all here. Black Widow's chronology is perverse: it's the first Marvel Studios movie to be released after Avengers: Endgame (movie #22, in which, in case you forgot, the character of Black Widow is turn-around touch-the-ground no-take-backsies double defo dead) yet it's set after the events of Captain America: Civil War (#13) and before the events of Avengers: Infinity War (#19). Save for one relatively minor post-credits tease, it might be the first Marvel Studios movie to look almost entirely backwards - an attempt, perhaps, to right the wrongs of the sausage-heavy Phase 1-3 roster with a female-led movie, or more likely, a genuine desire to flesh out one of the saga's most under-served backstories. Either way, Marvel Studios did not need to make this movie, but they did, and they did it right.

It's a relief, frankly, not to have an epoch-spanning 'franchise event' looming over the movie like a purple space tyrant covered in intergalactic drip. Black Widow was never intended to herald the return of Marvel movies back to the big screen after two years in the covid wilderness, it was only ever intended to be a postscript in service of a fan-favourite character. In terms of scale and spectacle, Black Widow is the David to Endgame's Goliath, but the more focused character pieces almost always end up being the more interesting Marvel movies anyway. Black Widow has a welcome 'side-mission' feel; in fact, the events of the movie are planned over a couple of beers in a gas station forecourt, as opposed to being signposted over eight years and 12 movies. You couldn't really call it 'small and intimate' with a straight face, but relatively speaking it's a nice little franchise palate cleanser. 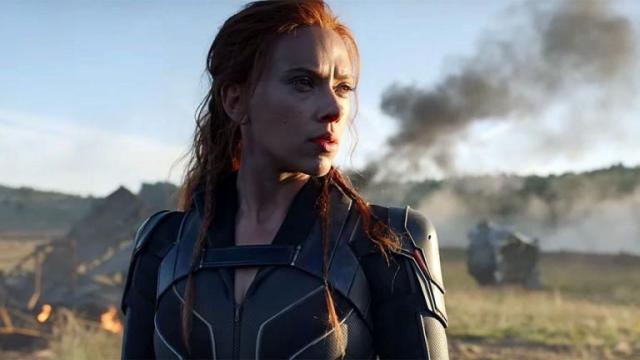 Although to be fair, Joanna Hogg would smash the shit out of a sequel


Directed by Australian filmmaker Cate Shortland, this first feature-length outing for Scarlett Johansson's super-spy turned Avenger delves into Black Widow lore only hinted at in previous encounters. We start in Ohio in 1995 with Natasha part of an American family who are revealed to be embedded Russian spies. Torn apart from her sister Yelena (Florence Pugh) upon their return home, the two girls are run through the 'Red Room' program, in which abandoned girls are trained into hardened assassins - or disposed of. On the run from the US authorities, Romanoff decides she might try and squeeze in a quick evil regime takedown between Avengers movies and so targets Ray Winstone's big bad Dreykov in another attempt to Tippex over the red in her ledger.

"
"
It's nice to dwell on the character's emotional journey a little, rather than having to chart her well-being via her haircut
Natasha's is definitely one of the more interesting character backstories to mine. As usual with Marvel, you get the feeling that, if they really wanted to take the piss, they could have made an entire trilogy out of the material available here, but there's much skipped over - Black Widow's relationship with Hawkeye is absent ("You and I remember Budapest very differently"), and her defection to S.H.I.E.L.D. is tossed off in a single line. The movie is admirably focused on Natasha's mission to dismantle the Red Room, so subsequently feels pretty slick and paced well, making its two-hour running time breeze by.

Inverse to the amount of superhero power she wields, Black Widow always displayed the most humanity of her Avengers counterparts - when she wasn't being Joss Whedon's glib schoolmarm, that is. Think back to her hug with Steve Rogers at Peggy's funeral ("I didn't want you to be alone"), her shared past with Clint Barton and family, her reticence in her relationship with Bruce Banner due to her sterilisation (bungled in the Ultron script but still a huge unexplored part of her character). Natasha's sad little PB&J sandwich 'n' soul-search scene in Endgame was utterly heartbreaking in more ways than one, so it's nice to see a dash of Lost in Translation-era Scarlett Johansson here and dwell on the character's emotional journey a little, rather than having to chart her well-being via her haircut. 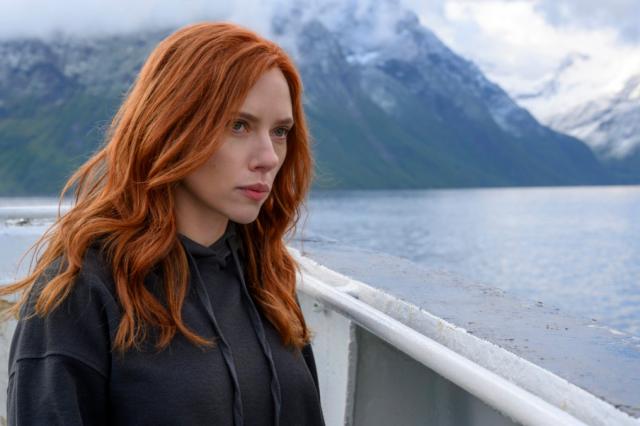 
(Incidentally, this is the first movie where the character's hair isn't an immediate and obvious impediment to her business of, y'know, actually being a spy. Go back and watch her first few franchise appearances and the difference between her styling there and here is striking; it's hard to discount the 'dolly-bird' accusations of her overly sexualised Iron Man 2 intro, and whether she wore her hair permed or straight, as in The Winter Soldier, it looked altogether like too much work for your average lady, let alone a super spy. I am a man so there is a high chance I have got this wrong like every clueless fedora-wearing twat on the internet, but unless I'm mistaken she wears no make-up in Black Widow, or at least a very subtle amount, and for the most part, the hair is no-nonsense: tied back, out of the way, and uninteresting. It is obviously no coincidence that this is the first time the character has been directed by a woman.)

Consequently there's a different dynamic in play here, a decent little spy caper with precious little superpowers in play and only a moderate amount of nonsense tech-science to distract. Otherwise it's a neat little fable about surrogate families and a search for acceptance, and Jac Schaeffer's story also finds room to share the spoils, with Pugh's little sister getting the majority of the best lines, as MCU outside observers often do. Pugh deserves credit here for bringing fresh energy to the story, although I loved her immaturity; the bottom lip curling when she gets upset, the clear glee at finally having the free will to buy her own clothes (women be shopping), the incessant piss-taking. Johansson, naturally, is as entrancing as always and carries the movie - she switches between vulnerability and empowerment so effortlessly - but it's certainly not a one-woman show. Only Rachel Weisz feels wasted in a role that's clearly several rungs below what she's capable of.

"HEVV A BANG ON DAT"


The sole letdown of the movie is Ray Winstone's Russian mobster Dreykov, not because the character isn't chilling or he's not serviced by the script, but because Winstone delivers one of the least-arsed accents in modern blockbuster history. Dreykov has some blood-curdling lines that fall flat because, although he adds approximately 10% of My First Russian to his accent, Winstone opts to retain the 90% of underlying Cockney. Subsequently, lines that should drip with the menace of a top tier Bond villain carry all the threat of a big floating head giving you long odds on Spartak Moscow. It's more jarring than you can possibly imagine: "I kyen finally come out of ze shadows, using ze only natural resource ze world has too much of… [Sexy Beast mode activates] GEWWS."

Otherwise, the cookie-cutter comes good as expected. There's a nice little mystery at the movie's core, a properly great and propulsive Lorne Balfe score to drive things on, plenty of laughs and more than a few stand-out action scenes, including a Bond-influenced prison break. In adding shades of grey to Black Widow's world, the movie always had to draw inside the lines, but Shortland and Johansson flesh out the character's portrait admirably, adding depth and colour where it was sorely needed. Given what's gone before, a solo movie was always going to be travelling down a road to nowhere, but after seven films and 11 years, it's a delight to finally get to know Black Widow.

Additional observations
- The 'Dreykov's daughter' plot point is actually foreshadowed by Loki, of all people, in 2012's Avengers movie - a great illustration of how casually lobbed off references to unexplored comic-book runs may or may not one day blossom into full-blown adventures, giving the Marvel universe a real sense of connectivity, even if was little more than hit-and-hope lip service at the time.
- The final action scene, most of which is spent falling from a big thing, is a little disappointing, given that throughout said fall you assume that something big and cool will happen to prevent the inevitable SPLAT landing, but it culminates in little more than a bit of crash-bang editing. I just want movies to acknowledge that normal people can't survive falling from a mile in the sky and then walk it off.
- There's a perfect opportunity in this movie for Natasha to get laid - god knows it'd de-stress her - but it's not taken, proving once and for all that the MCU is curiously sexless.
- Someone do a mash-up of Black Widow's farmhouse scene and Homer's college dean: "Hello, that sounds like a pig fainting." When it happens, you'll know.

More:  Black Widow  Marvel  Cate Shortland  Scarlett Johansson  Florence Pugh  Ray Winstone
Follow us on Twitter @The_Shiznit for more fun features, film reviews and occasional commentary on what the best type of crisps are.
We are using Patreon to cover our hosting fees. So please consider chucking a few digital pennies our way by clicking on this link. Thanks!