"So what is Vision?" I'm at the pub, still digesting Captain America: Civil War, and I've been caught off guard. "Well, he's... um...he's a, er... so Thor had this sort of bath, then Ultron, erm... You know the Mind Gem, th-..." Christ, I'm racking my brains and his first movie only came out a year ago. Marvel movies move pretty fast; if you don't re-watch regularly, or God forbid miss a movie, your pub trivia game will suffer. (My best guess: Vision is a space ghost fruit roll-up robot butler dressed by George at Asda). Civil War is the 13th movie in the Marvel Cinematic Universe, and if you haven't been paying attention over the last eight years, you're going to find it really, really hard to keep up. The MCU doesn't slow down, doesn't pull its punches and doesn't really do 'Previously, on the Marvel Cinematic Universe..." It has unapologetically and unreservedly been constructed from the ground up for fans - and those fans are going to go bend-over-backwards apeshit crazy for Civil War, arguably the movie that the previous 12 have all been working towards.


From now on, this is the movie you point people towards when they complain superhero movies are shallow. Civil War has so much depth it's a wonder James Cameron hasn't piloted a small submersible into it. Billed as a Captain America sequel - and it really is, benefitting where the Avengers movie falter slightly by having a clear and recognisable protagonist - Civil War is fed by a dozen different back stories, stretching all the way back to 2008's Iron Man. The conflict here isn't just between Steve Rogers and Tony Stark as the hashtags would have you believe, but between Avengers old and new; between regulation and vigilantism; between the heroes and the public they serve. Notably, it is also an Iron Man movie that enjoys well over an hour of plot and discussion before Iron Man even wears the Iron Man suit.

What we see here are consequences to actions from previous movies, continuing Marvel's almost supernatural ability to address criticisms of DC movies in their own narratives. Age Of Ultron saw the Avengers spend the entire last act saving people instead of casually slaughtering them like the Man Of Steel; in Civil War, the conflicted characters slowly fracture into uneasy alliances, unlike Batman and Superman, who just sort of start whaling on each other. I won't focus on Dawn Of Justice too much, but compare and contrast: the slow-burn reasoning and ideological debate between Steve Rogers and Tony Stark ("If we can't accept limitations, we're no better than the bad guys") and the punch-drunk neo-politics of Bruce Wayne on Clark Kent ("If there's a one per cent chance he's our enemy, we have to take it as an absolute certainty!"). Batman V Superman is desperate for us to see its heroes fight; Civil War knows we'll enjoy those scenes with a heavy heart. 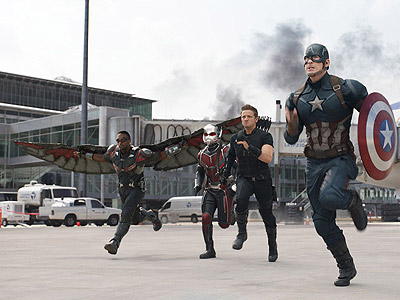 
This is a movie that tests the foundations of relationships it has spent almost a decade building. Cap and Iron Man are the banner head-buttees, but consider also Bucky (Sebastian Stan, increasingly worthy of his roster position) testing Steve's loyalty to his buddy, and Black Widow (as always, the best thing in the movie) putting her principles ahead of her partnerships with Rogers and Hawkeye. Everyone has their own agenda here: no one is heading towards the opposing team in that iconic dust-up at Leipzig airport without knowing who they're going to punch in the face first and why. The crunching final fight between Captain America and Iron Man, accompanied by a truly stirring Henry Jackman score, is genuinely heartbreaking as a result.

The Russo brothers have done a masterful job orchestrating order out of chaos. I counted 14 major characters big enough to marquee their own movie, and that's before you even get into the supporting cast. There's room for everyone to shine: Black Panther needs no lengthy origin story and hits the ground running; Ant-Man, surely the most likely character to be underserved given he's the most recent recruit, is given the lion's share of the film's funniest moments; only Spider-Man feels like a trailer for his own movie, but even his extended cameo undercuts his tiresome backstory with one gag. There's even room for Thunderbolt Ross! And Peggy Carter! And Crossbones! And Zemo, probably the smartest and most well deployed villain in the MCU to date! Oh shit, and Redwing! And Martin Freeman, playing Suit Man! The Russos pace the movie perfectly and economically, leaving no character underdeveloped. Except maybe for Suit Man. #TeamSuitMan 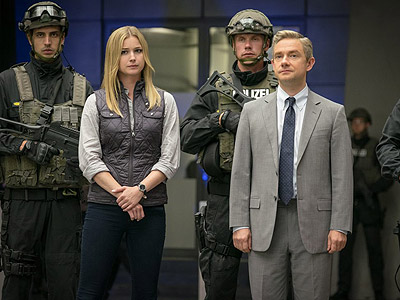 
The worst thing you could say about Civil War is that it doesn't really have an ending, but you could say the same about the last 12 Marvel movies. It's arguably less funny than previous Marvel movies (making Tony Stark a killjoy is a bold move indeed) but that's because the stakes are higher. Civil War is the culmination of everything Marvel have been working towards and it pays off in previously unimaginable ways.

There is a moment that stuck in my mind way longer than the cameos or the fights or the explosions, of which there are many; a simple moment of compassion between Natasha and Steve at his lowest ebb: "I didn't think you should be alone tonight," she says, tenderly touching his arm. The reason Civil War's punches leave you dizzy is because its cast of disparate heroes - from supermen to billionaires to assassins to weird red android goblins - genuinely feel like friends. And with friends like these, who needs Thanos? (Thanos is a big purple space dude, who- you know what, never mind).

More:  Marvel  Captain America  Civil War  Robert Downey Jr  Chris Evans  Superheroes  Avengers
Follow us on Twitter @The_Shiznit for more fun features, film reviews and occasional commentary on what the best type of crisps are.
We are using Patreon to cover our hosting fees. So please consider chucking a few digital pennies our way by clicking on this link. Thanks!