Review: Spider-Man: Into The Spider-Verse is a superhero spectacle bar none 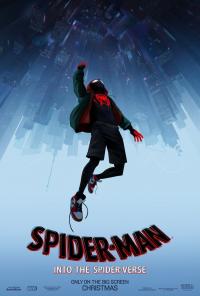 Aren't we supposed to be bored of superhero movies by now? 2018 has been a vintage year for the costumed crowd: Black Panther, Infinity War, Deadpool 2, Ant-Man & The Wasp, Incredibles 2 and Teen Titans Go! To The Movies have all excelled, and early word even suggests that Aquaman - Aquaman! - is converting disbelievers. This Sony animation from producers Lord & Miller is the third triple-A Spidey property to see release this year, after Avengers and the PS4 exclusive videogame, but even considering those high benchmarks and such a crowded field of contenders, it makes a strong case for being the best of the bunch - Spider-Man: Into The Spider-Verse is a sprawling, wall-crawling visual masterpiece that's boundless in its creativity, kinetic in its dynamism and authentic to its core. It's the movie that finally nails the nirvana found between the twin mediums of comic-books and cinema.


Into The Spider-Verse is a breathtaking visual experience - that old cliche of every frame being worthy of wall space has never felt more apt. The art style is stunning, an inventive blend of CG animation overlaid with 'pencil marks' and comic-style halftone dots that's framed, cut and composited with all the love and care synonymous with Spider-Man's most iconic inkers. It's an irresistible day-glo mash-up of old-school ink and paint, bleeding edge digital design and Enter The Void meets Andy Warhol style pop art, with dashes of classic noir, manga, memes and even Hanna Barbera animation. At first, the synaptic assaults might feel overwhelming, but just as with Lord & Miller's aggressively energetic Lego Movie, the eyes soon adapt (you can tell just by watching five seconds of a Lord & Miller movie that they have the kind of nano-attention span that only the sickeningly young possess).

Into The Spider-Verse is 2D, on screen as it would be on paper, but after a while you'll even notice a 3D-style depth-of-field blur on the backgrounds, another level of visual ingenuity that draws you ever closer to the action. It's something that's been said about superhero movies before, even as far back as Ang Lee's Hulk, but Spider-Man: Into The Spider-Verse is the closest we've ever come to seeing a comic-book brought to life. After this movie, even the vibrant and distinctive movies of the MCU feel somewhat flat, safe and static in comparison. 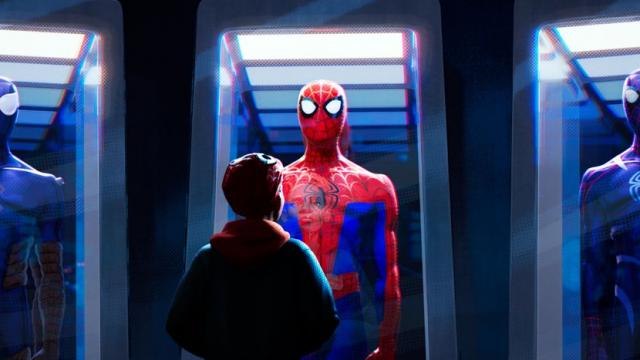 
It don't mean a thing if it ain't got that swing, but Into The Spider-Verse knows Spider-Man inside and out and back to front, from his origins through every modern iteration. This is a movie that knows audiences haven't exactly been starved of spider-content in recent years, but leans in to embrace that fact, referencing, building on and learning from Spider-Men of the past, present and future. That it does so with such whip-smart humour is a joy ("I love you, I'm so proud of you! Wait... do I want kids?" wonders Spidey during a moment of extreme peril), and the movie's narrative - pushing relative comic newcomer Miles Morales to the fore while simultaneously exploring the depths of comic lore - still has room for surprises and twists on established characters. Into The Spider-Verse is a movie that understands Spider-Man in totality - the man, the mythology, the multiverse.

I want to shout from the rooftops how deliriously entertaining Into The Spider-Verse is. It's so good it makes me want to release arcing ropes of my own white fluid. Funnier than Spider-Man: Homecoming, more exciting than Avengers and better looking than just about any superhero movie you could care to mention, Into The Spider-Verse is the most perfect embodiment of Spider-Man to date. Drawing inspiration from page, screen and beyond, it's exactly as a character whispers to Miles, the precise moment a new hero is born: "You're the best of all of us." One can't imagine a more suitable send-off for Stan Lee. Excelsior indeed.

Additional observations
- Jake Johnson is perfectly cast as an older, fatter, alternate universe Peter Parker. I didn't clock who voiced the younger Spidey until the end credits, but let's just say it represents something of a collectors item for Marvel.
- The final 15 minutes, set against a multicolour meltdown as a dimension portal threatens to swallow the city, is probably not much fun if you're epileptic or prone to migraines, but for the rest of us it's a quite astonishing visual spectacle.
- More alternate universe superhero animations, please. I'd gladly trade the current flesh and blood X-Men for hand-drawn characters, although it's not like they could get any more two-dimensional.
- There's a throwaway bit with a bagel that made me laugh louder than any other movie this year.
- Animated Spidey is the best Spidey - it's all in the eyes, expansive and expressive like the Stark suit only wishes it was
- The only scenes that really took me out of the movie were the ones with Aunt May, who is voiced by Lily Tomlin but clearly physically modelled on actress Jill Clayburgh (Bridesmaids), who died in 2010. This made me feel pretty uncomfortable, but I might just be imagining the whole thing, so.
- This movie is so great, we haven't even discussed the fact that Nicolas Cage voices an alt-universe noir-era Spider-Man who talks like a Raymond Chandler gumshoe and is obsessed with Rubik's Cubes.
More:  Spider-Man Into The Spider-Verse  Spider-Man  Marvel  Phil Lord  Chris Miller  Jake Johnson  Hailee Steinfeld  Nicolas Cage
Follow us on Twitter @The_Shiznit for more fun features, film reviews and occasional commentary on what the best type of crisps are.
We are using Patreon to cover our hosting fees. So please consider chucking a few digital pennies our way by clicking on this link. Thanks!