Poor Oscarless Leo. Just imagine the soul-crushing frustration that must come after enduring unimaginable feats of survival in the making of this film, only for everyone instead to talk about the (false) rumour that you get raped by a bear in it. Imagine having the fortitude of character to eat raw bison liver and climb inside a dead animal carcass for the sake of your art and then have all your efforts overshadowed by the collective public thinking that, at one point in the movie, a horny grizzly surprises you with a sexual ambush. And the worst part is, with all attention on that ridiculous story instead of Leo's dedication to his performance, it might actually cost him the Oscar. That bear might just end up fucking Leo after all.


The question is though, does he deserve it in the first place? I know it might seem like we are making a habit of criticising the Oscar-worthiness of this year’s nominees, but, just as the bear rape story has overshadowed DiCaprio’s arduous shoot, any focus that WAS given to Leo’s survival tactics during the making of this film has outweighed any reports of any objective opinion about his actual performance. It seems that we have reached peak ‘authenticity’ in film, when it’s more important for us to know that Leo had a shit time during the making of the film than to reasonably assume that it’s all corn syrup and acting.

But does that, in itself, automatically make a good performance? You could argue that if DiCaprio had a real-life son murdered, as happens to his character here, and then, to make matters worse, also lost three toes to frostbite, then it wouldn’t necessarily make his portrayal any more realistic. At the same time, Eddie Redmayne didn’t actually have to develop motor neurone disease in order to become the clear winner of last year’s statue. Yes, Leo probably deserves some kind of Bear Grylls award for drinking your own piss, but is he this year’s Best Actor? I can’t say that I see it. 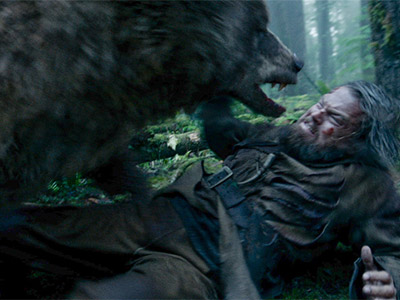 
A big obstacle is the fact that he is Leonardo DiCaprio. We all know that he is a superb actor and easily one of the best working today, but sometimes, when you’re also one of the highest profile A-listers in Hollywood, all we can see is one of the highest profile A-listers in Hollywood wearing a wig, putting on an accent and shouting a bit. When Leo chomps on the internal organ of a buffalo, I don’t think “God, Hugh Glass is really going through the wringer here”. I think “Leo, mate – that’s disgusting. And you probably have a brilliant props department just going to waste who could have baked a bison liver cake that would look just as realistic. You could be eating cake now, Leo. But instead, because of your pointless principles, you’re chowing down on raw, bloody animal tissue.”

All of this is, of course, a harsh criticism of what is still a good performance, but it’s a huge injustice that the Leo Oscar Quest has dominated all interest in this film when it’s actually the least impressive aspect.

Leo isn’t even the best actor in the film. That award goes to Tom Hardy, who disappears into his role as John Fitzgerald, the greedy, mercenary fur trapper who betrays Glass and leaves him for dead. Between the thick beard and even thicker drawl, there is nothing in this role that reminds us of the actor beneath, and yet it is a distinctly unshowy depiction.

To find the real star of the show though, we have to look behind the camera. Maybe it’s because we saw him perform similar miracles with last year’s Birdman, but Iñárritu’s direction is the real achievement here. Fluid camerawork, astonishingly captured vistas, invisible editing, impossible situations presented as matter-of-fact reality and incomprehensible man hours going into producing seamless simplicity – this is Iñárritu continuing his ingenious rule-flouting to make a movie that is unfathomable in its complex construction, all to tell a story that is, conversely, beautifully minimal. 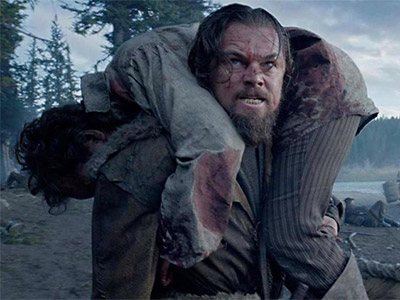 The only carrying that Leo does in this film.


But all focus continues to be given to Leo’s lead role (and as such it also has to be the case in this review apparently). Because – criminally – he hasn’t won an Oscar yet, and he has become so desperate for one that he has taken to putting himself and his body through hell, the acting equivalent of shooting a flare in the sky for the Academy to see.

More:  The Revenant  Alejandro Gonzlez Irritu  Leonardo DiCaprio  Tom Hardy  Will Poulter  Domhnall Gleeson
Follow us on Twitter @The_Shiznit for more fun features, film reviews and occasional commentary on what the best type of crisps are.
We are using Patreon to cover our hosting fees. So please consider chucking a few digital pennies our way by clicking on this link. Thanks!