Forgive me for sounding like I'm on the company payroll, but have Marvel movies ruined superhero movies for everyone else? I fear they have. The Marvel Cinematic Universe made its own space in the superhero sphere; it owns the area marked 'fun'. DC, as a countermeasure to all the lousy fun everyone was enjoying, staked their claim on the 'serious' space; heroes with grim faces carved out of rock, pre-tantrum lip-wobble expressions lashed with rain. Where does this leave the X-Men? I'm sure I don't know anymore, because X-Men: Apocalypse attempts to be all things to all people and ends up being neither overtly fun or remotely serious, just entirely ridiculous. It feels like a superhero movie back from when no one really knew what that was supposed to mean, or, as a friend of mine put it so perfectly: "It's like a shit superhero movie from the nineties".


Apocalypse is a movie that is dangerously overloaded. With misguided valiance, Bryan Singer is attempting to service too many characters - and the spinning plates quickly come clattering down. One early example of its lack of balance comes early on, in the first HOUR of set-up, when Singer cuts between Mystique (Jennifer Lawrence) recruiting newbies in Berlin and Charles (James McAvoy) reigniting his barely-there, creepshow infatuation with the CIA's Moira MacTaggart. The threads are intercut for a while, until Xavier and Beast jet off to locate Moira, which presumably takes several days, then the film cuts back to Mystique, wearing the same clothes on the same night. I know the X-Men movies play fast and loose with chronology, but this is astonishingly jarring. Time literally stands still when there is too much story to be told.

(I guess we should expect nothing less from a movie that expects us not to care that the characters show no signs of ageing in the 21 years since the events of X-Men: First Class. The next movie will apparently be set in the nineties, by which point Beast might even have a dab of grey in his fur. "Remember the Cuban Missile Crisis?" the teens in Xavier's mansion will say. "That was totally bogus!") 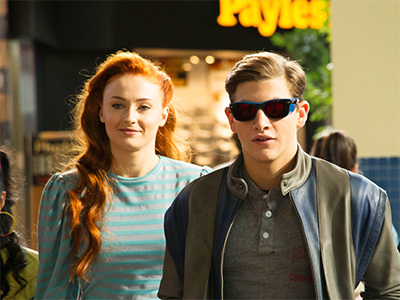 "But it was nothing compared to the Korean War!"


X-Men: Apocalypse is a ship failing to weather a storm. The keel is so uneven: the movie is frontloaded with exposition, some of which is welcome (Michael Fassbender is unsurprisingly excellent and is given the most to work with), but the payoffs are not equal to the time spent setting them up. Magneto, for example, is given acres of space as Erik Lensherr: we see his life, his work, his past and his family. But as Magneto? He falls straight back into the 'misunderstood supervillain' archetype, reading from the exact same playbook and tracing the same arc from the last two movies. I'm no expert, but this movie feels like it only has two acts: first reel set-up and last-act action scene. Characters seem to spend an inordinate amount of time just standing around (or sitting around, in one case). Simon Kinberg's screenplay gives them incredible powers, then kneecaps them via convenient plot points when they get too strong. Nightcrawler takes lots of naps. Quicksilver is basically clamped. Mystique bangs on about being a soldier and going to war and when they finally do, she achieves precisely fuck all.

Shouldn't these character trajectories feel, I don't know, more satisfying? This is the third movie in a trilogy! Spanning 20 years! We should expect growth! X-Men: Apocalypse's idea of growth is 'Professor X loses his hair in this one'. Instead of growing into their characters, the cast seem intent to grow out of them: Lawrence made no bones about the fact she hated the Mystique prosthetics and spends 75% of the movie in her own skin, ditto Nicholas Hoult, who claims he "has that guy under control now". Fun! The X-Men movies feel like they've run the gamut of mutant acceptance, from X2's gay panic metaphor ("Have you tried... not being a mutant?") to Apocalypse's costume-less contract stipulation and suppression ("I left my meds in the mansion!").

Oh, the costumes. I feel like if you're really noticing the costumes, the costume designer didn't do such a great job. Singer made a very wise yet unpopular choice 16 years ago by kitting out his X-Men in black leather ("What did you expect, yellow spandex?"); now, in 2016, we've regressed to having characters like Psylocke, who we're led to believe stopped at some point on the road to evil to change into a swimsuit. And Apocalypse! Poor Apocalypse. Billed as the biggest and most dangerous X-Men villain yet, he is not imposing in the slightest, not helped by a costume that overwhelms Oscar Isaac, who is maybe 10% present here and may as well be Kevin James. Early on, a man calls him "Clown-Face" and it's such a devastating deconstruction of what was presumably an arduous makeup job you wonder why they left it in the movie. I did not get 'Mutant god trying to start a new world order'. I got 'California Raisin at a Warhammer convention'. 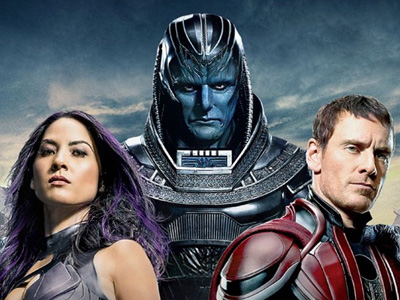 "Be honest, you guys. Does. This. Suit. Make me look fat there I said it."


Old 'Poc is a pretty good summation of everything that's wrong with X-Men: Apocalypse - a clumsy comic-book caricature. There are literally sequences in this movie that were predicted in Deadpool. Scenes that are meant to play serious are met with gales of laughter - Wolverine's cut-out-and-keep sequence is botched, for example, thanks again to a bizarre costume choice. There's a jibe at The Last Stand that would work if the entire last act wasn't eerily similar to Brett Ratner's finale. Plot conveniences stack up: Apocalypse recruits his four horsemen locally in about ten minutes; Magneto attempts to escape his past controlling metal by working at a metalworks; Xavier has an extremely odd and artificial relationship twist with Moira that is never fully explained or even needed; Apocalypse learns about the modern world by downloading newscasts from, uh, an old cathode ray TV set, somehow? Mercifully this does spare him the indignity of having to ask for a WiFi password in his beyond-parody two-syllable monster voice.

Oh, holy shit, while I have you here: the opening credits are legit hilarious. They're meant to be a potted history of a thousand years of human development, all viewed via fast-moving, vaguely X-Men-esque tubular tunnels. Sounds good on paper. On film it feels like a fifth year graphics project, complete with snapshots of the Renaissance, some old timey coins, a pause on the Mona Lisa (Art!), then suddenly: Tanks! War planes! An exploding swastika! A massive hammer and sickle that smash together with a metallic clunk! EXTREME HISTORY! It is kind of like hurtling headfirst through an Encarta-sponsored waterslide. It is too bizarre and too perfectly awful not to mention.

Otherwise, everything feels disconcertingly familiar. Xavier believes in humanity. Magneto believes they are weak. Raven can't really make up her mind (that's so Raven). Moira suits up and tags along because her superpower is exposition. There's a villain, for a bit, but it's cool because teamwork is the greatest superpower of all you guys, aaand: sequel. None of it feels earned. No moments ring true. Days Of Future Past at least felt like it had real consequences and had a reason to throw characters new and old into the mix, even if it tied the franchise chronology into a knot. With X-Men: Apocalypse you sense no other reason for the introduction of new characters (Sophie Turner, Tye Sheridan, Kodi Smit-McPhee, all perfectly adequate) than to continue the franchise beyond the contracts of the existing cast members, hooking the fresh blood up to the drip of an ageing property that's started showing its worry lines. One suspects that Marvel Studios know exactly what they will be doing in 10 years. Fox, you imagine, will be desperately hoping Hugh Jackman hasn't changed his phone number.

More:  X-Men  X-Men Apocalypse  Bryan Singer  James McAvoy  Oscar Isaac  Superheroes  Marvel  Fox
Follow us on Twitter @The_Shiznit for more fun features, film reviews and occasional commentary on what the best type of crisps are.
We are using Patreon to cover our hosting fees. So please consider chucking a few digital pennies our way by clicking on this link. Thanks!