2012! The Jubilee! The Olympics! Barack Obama was re-elected! What a year! Also some films came out, and some of them were quite good, which is why we're here.


Here it is: perhaps the least definitive end-of-year round-up you'll find on the internet. The 20 films that follow are the ones that tickled us the most in 2012, not counting the several thousand that myself, Matt, Luke, Ed and Rob managed to miss – you'll find no Magic Mike, Amour, Searching For Sugar Man, The Hunt, Tabu or Holy Motors here. Nor will you find Shame, because it was released in early January and we totally forgot to include it. See what I mean about being the least definitive?

Cheers to everyone who contributed words for the site in 2012, and thanks also to those of you who read them (quite a large overlap, I reckon). We'll be back in 2013 with even more poorly-developed ideas than we had this year, but for now, all that's left to do is rank the year's best movies in an entirely arbitrary order that matters to no one but ourselves! 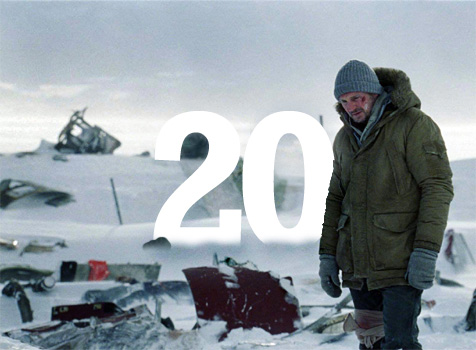 Fatally missold as the latest in the 'Liam Neeson versus...' series, arctic thriller The Grey was about as far from a wolf-punching action fest as you could have expected. In fact, the slow-thawing survival slog represented a return to the kind of dramatic role that Neeson used to relish before he began his slow and awkward transition into ageing action hero.

How long has it been since Liam Neeson has had something this emotionally weighty to work with? Joe Carnahan's sombre screenplay sees Neeson's oil worker Ottway up to his elbows in grief, suffering not only from the slight inconvenience of a plane crash in the frozen Alaska wastelands, but also a major bummer in the form of his crippling depression, while his co-workers are systematically picked off by hungry wolves, cold and exhaustion. Rather than mete out all manner of lupine abuse, Neeson instead gives an insular performance of great intensity, culminating in a scene where he prays to God for help, calls him a "phony prick fraudulent motherfucker" then utters the immortal line: "Fuck it... I'll do it myself." There's the Liam Neeson we know and love.

Despite his uncannily presidential looks, Neeson couldn't commit to Steven Spielberg's long-gestating Lincoln biopic, and while there's no doubt that seeing Daniel Day-Lewis up on that Oscar stage in February will sting, at least in The Grey he has a movie that shows he's not quite ready to join the Expendables just yet. Ali

Defining moment: Not the plane crash, but the unexpectedly bracing moment shortly afterwards, in which Ottway comforts critically-injured colleague James Badge Dale as he slips away: “You're going to die, that's what's happening. It's all right. It'll slide over you. It'll start to feel warm.” An early indicator The Grey was not to be Taken On Ice. 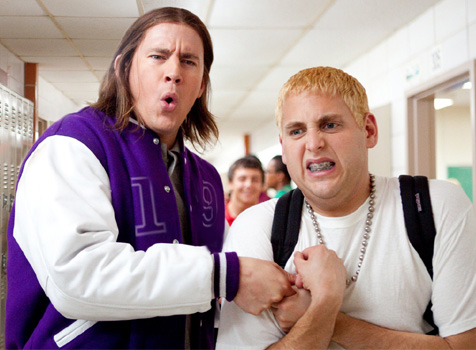 My expectations of film comedies are generally low, on the grounds that the majority of them are awful. Every now and again, though, you enjoy one far more than you thought you would and it's a glorious surprise. So the winner of this year's Who Knew Award, sponsored and entirely made up by me, is 21 Jump Street. No, seriously. An '80s TV show rebooted as a high school comedy. With Channing Tatum in it.

The familiar fish-out-of-water setup (two young cops chosen to work undercover in a high school because, as their captain Ice Cube puts it, they are "some Justin Bieber, Miley Cyrus-looking motherfuckers") established, what became quickly apparent was that even though the lunk-headed jock role came easily to him, Tatum had some comedy chops. He had a comfortable odd-couple chemistry with co-star Jonah Hill – himself on his best form in a while – and he knew how to deliver a gag, bless him.

More than passing the laughs-per-minute test, 21 Jump Street throws in some great gags, a pretty touching love-interest subplot, and a surprising quota of well-crafted action sequences. And it seems happy to stand on its own feet, never seeming desperate to establish a franchise. Though there's going to be a sequel, obviously. I mean, the thing made money.

Defining moment: Finally popular at high school on his second time out, Hill is relishing it; the high-five hub of the beer-bong party they've thrown. After a fight, he ends up with a knife in his shoulderblade. "When did I get stabbed?" Everyone stops. "That's awesome!" Everyone cheers. 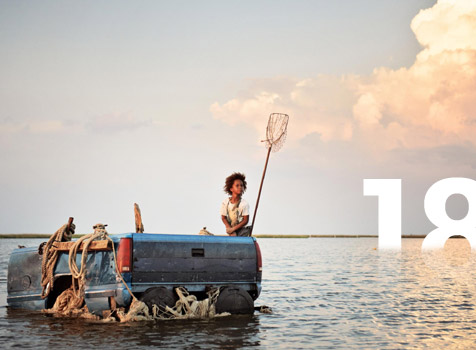 18. Beasts Of The Southern Wild

"Life," a wise old man once said, "is the name of the game, and I want to play the game with you." Of course, the means to play the Game of Life depends upon which pieces you are handed. For some people opportunity knocks, whilst for others each day is a roll of the dice. In the case of six-year old Hushpuppy, the main protagonist of Beasts Of The Southern Wild, the objective is survival: survival against nature, survival against her self-destructive father, Wink, and survival against an ever-encroaching outside world threatening their way of life.

Behn Zeitlin's semi-cautionary tale draws from real-life events in the bayous of Louisiana, where rising water levels (due to the melting ice caps, Gore-fans) are slowly claiming land used by remote fishing communities. Filming in the area and casting locals adds much-needed realism to what is admittedly a wafer-thin story. What gives Beasts of the Southern Wild its uniquely surreal flavour, however, is presenting more or less everything from Hushpuppy's viewpoint, and indulging in the flights of fancy she uses as a coping mechanism. Think Where The Wild Things Are meets Demolition Man.

Although never as striking as, say, Alexandria's interpretations in Tarsem Singh's The Fall, the visualisation of the titular beasts is a neat device to convey something both alien and destructive, and therefore scary to a child's eyes. Whether or not Quvenzhané Wallis - who was just five years old at the time of casting - understood what she was acting out is debatable, there's no doubt her natural charisma carries the film just as well as any adult could, allowing Zeitlin breathing room to more effectively bring his well-disguised gritty fantasy to life.

So when the chips are down and the monsters - be they the product of a wild imagination, or as real as you and I - roam free, will you be equipped to rise to the challenge? Me? Well, I got a Star Wars chess set for Christmas, so I'm pretty much prepared for all of life's eventualities. Luke

Defining moment:Hushpuppy setting fire to her home in act of childish defiance, only to realise how helpless and unprepared she is when it gets out of control. 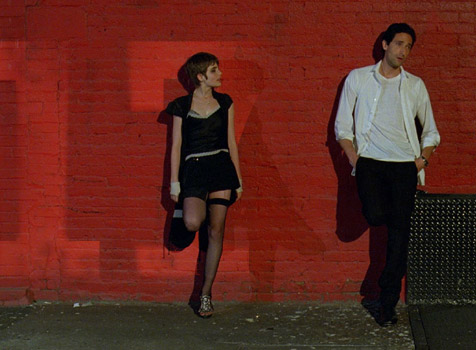 Look closely at the cinema of 2012 and you'll observe that the theme of saving the world is never far away. Gotham City, New York, uh... a bloody great big battleship: we're all in jeopardy and we need a hero to deliver us. Look closer and you'll see Adrien Brody as Henry Barthes, a supply teacher trying to save it in his own small way - if he can figure out whether he wants to.

Tony Kaye's Detachment paints with a big brush on a small canvas, immersing itself in the grimy tub of an American public school system where everyone, teachers, students and parents alike, has stopped caring. Maybe Barthes has stopped caring too; if he knew, he’d probably tell us. But what he does know is what he sees around him: uncontrollable students, funding cuts and nobody with the resources or inclination to fix it. Maybe if he takes this teenage prostitute in off the street he can do at least some good in the world. Yeah, bright idea, mate.

What Detachment demonstrates, 14 years on from his last major feature, American History X, is that Kaye is a filmmaker fascinated by the manner in which an institution can crumble and decay, and by how those within it either accept it or rage against the dying of the light. The wonderful surprise is in how well his odd stylistic choices of structure and camerawork complement this, highlighting the disarray. Barthes is detached, we’re detached; the whole damn system's detached. Hey, that’d make a good name for... oh right, got it. Ed

Defining moment: "Have you recently been raped?" Barthes asks the young prostitute. "What do you care?" she demands. "I'm not sure that I do, particularly," he replies, pointing to the trauma on her thigh. "But I can put something on it for you." 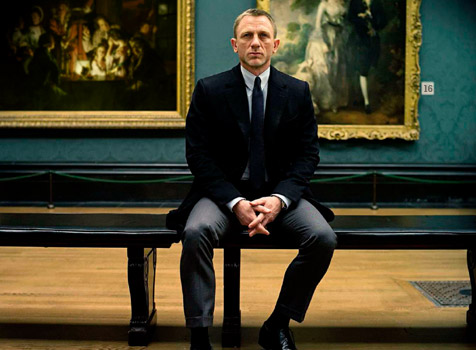 The most financially successful Bond movie ever. The most successful British movie ever. The best Bond movie ever? That last one might be a bit of a stretch, but Skyfall nonetheless represents the zenith of Daniel Craig's tenure as 007: a beguiling blend of action, drama and pathos that fits the blonde Bond a damn sight better than that hella ugly Tom Ford suit of his.

Look not just to director Sam Mendes for the reasons for Skyfall's myriad successes, nor solely to the cast – though Craig and Dench have never been better, and Javier Bardem is the best Bond villain since Sean Bean. Put simply, every aspect of Skyfall's production is firing on full cylinders, whether it's cinematographer Roger Deakins (providing the most luscious looking Bond movie ever), composer Thomas Newman (David Arnold is only slightly missed) or production designer Dennis Gassner, who takes Bond on a whirlwind tour of the world despite only occasionally venturing out of the confines of Pinewood.

Though there's still a lingering sense of déjà vu come the close, you realise it's the same giddy anticipation you felt at the end of Casino Royale: Bond is back to full strength once more, and it feels like there's nothing he can't do. Except fuck someone without them dying, obviously. Ali

Defining moment: Leaping from a JCB onto a moving train, Bond takes the time to adjust his cuffs nonchalantly, despite having been shot, like, thirty seconds previously.

Click here for the full review
More:  Top10  Top 20 Movies
Follow us on Twitter @The_Shiznit for more fun features, film reviews and occasional commentary on what the best type of crisps are.
We are using Patreon to cover our hosting fees. So please consider chucking a few digital pennies our way by clicking on this link. Thanks!
Next Page »