We spent 2012 doing what we do best: watching TV and putting off writing about it. And my stars, the things we've seen. If only there were some way to convey our preferences of one thing over another through hierarchical structuring. Wait a minute ...


Another year down, and we still haven't moved from the sofa. But it was a pretty great one: we sat in the same room as Bryan Cranston without anyone calling security, managed to continue making fun of The X Factor without actually watching a single second of it, and did some fun two-way discussion features on Mad Men, House and Red Dwarf without anyone complaining about how self-indulgent they obviously were.

On a personal note, the top five shows are all things that made me legitimately, punch-the-air excited about TV in 2012, and that's something to celebrate. Thanks to everyone who wrote in and on us over the last year, and even bigger thanks to you if you read a word or two. In 2013 they'll be funnier, we promise. (*crosses fingers behind back*) 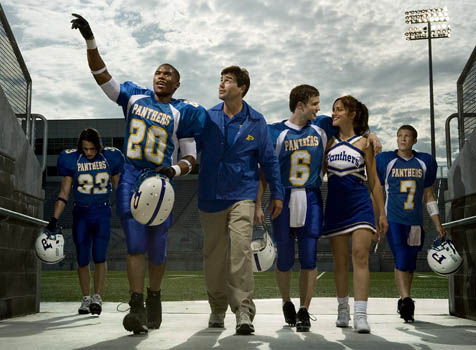 OK, so it's cheating a bit to include a show that finished in 2010, even if it has been airing on Sky Atlantic. But 2012 was the year I discovered the Dillon Panthers on Netflix and so developed a vague understanding of the rules of American football. There's more to it than illegal dog-fighting rings and regular murder-suicides, it turns out.

I've no idea why a show about a coach trying to help kids become fine young men through sport should be so good, particularly when it was created by the guy who made Battleship. But there's something about Kyle Chandler's Coach Taylor. His team talks are peppered with clichés, but somehow they inspire the shit out of you. He and his wife Tami (Connie Britton), the school's guidance counsellor and later principal, feel a responsibility towards the kids that's never short of touching. They're also probably the most convincing husband and wife I've ever seen in TV.

What looks like cookie-cutter inspirational drama ends up addressing a lot of sensitive issues – the damaging potential of small-town mentalities and putting undue pressure on young people; race; poverty; public school funding – and faces them all head-on without flinching. Most crucially, it never shies away from the surety that at some point in every episode, Tim Riggins will wake up with a hangover, groaning. And look amazing. Ed

Defining moment: With his players at each other's throats, Coach Taylor calmly walks into a bickering changing room and writes the word 'STATE' on the board, meaning the Texas State Championship none of them thinks they have a hope of winning. "What d'y'all fellas think about that?" he asks. I almost cried. 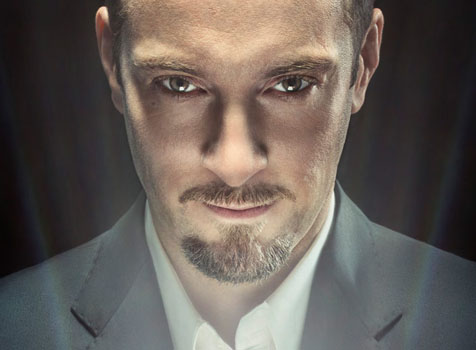 The cheap tricks of the stage magician make for about as escapist and superficial TV as you can find without a singing contest involved. But then Derren Brown's not a magician, and he's certainly not cheap. What he's evolved into is a very public defender of rationalism and a debunker of frauds, while never losing a sense of showmanship.

The agenda he's pushed in his years on TV is almost anti-magic, in which the sense of wonder at the trick doesn't rely on mystery; rather that knowledge of the mechanics is just as impressive, with added importance placed in recent years on the wider implications the act has for the subject and the way they live their life. So he's convinced a timid guy that he had to land a plane to save the passengers, and made a selfish guy think he had to man up and save strangers from a zombie apocalypse.

Fear and Faith, his second two-part special of the year, focused in its first episode on how people can overcome their fears through placebos and covert psychological persuasion. Most fascinating, though, was the 'Faith' episode, which explored the psychology of religious belief. He took an avowed atheist and gave her an experience of religious conversion through suggestion, demonstrating how the feeling of faith can be induced, no matter how natural it seems to the believer. There was no mood of gloating or triumphalism over this, as you'd find if Richard Dawkins had achieved the same thing: just satisfaction in another experiment into how the mind works. All explained throughout, and not a magic wand in sight. Ed

Defining moment: Reminding the atheist of childhood memories of her father, while tapping the table to associate them in her mind with the sound, Brown moves on to suggest to her that the good times in her life could have been the result of external agency. When she stands up, she is tearfully overwhelmed by the grace of God, or so she thinks. 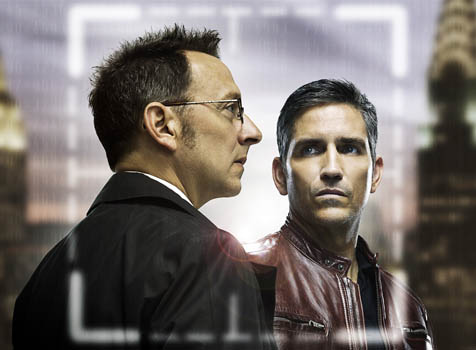 Cinema is full of Bournes, McClanes, Batmen: the force-of-nature individuals who want to right wrongs and can't be stopped. Not so many in TV, though, up until this year. Now John Reese has hit the streets and he's going to clean them up. Not literally: that would be shit.

The unstoppable vigilante idea works very well in episodic TV form, it turns out: Jim Caviezel's ex-CIA agent teams up with Michael Emerson's billionaire tech genius to stop crimes before they happen. In a film, this would get wrapped up pretty quickly in one big case, leaving room for a sequel. On TV, as with so many of the best ideas, it has more room to be developed. Every week throws up a new one: sometimes The Machine identifies a potential victim, sometimes a perpetrator. They test the pair more and more. We follow Taraji P. Henson as a cop on their tail, who slowly begins to figure out that maybe they're a force for good. This could get dull pretty fast, but there's variety in each case; a fresh twist each week. And at the centre of it all Caviezel – strangely labelled wooden by some reviewers – is enigmatic and convincingly relentless.

There's a wider point here, too, about surveillance and how it's a part of American life in a post-9/11 world. Everyone's on the grid, and everyone can be traced. While Homeland deals with the bigger-picture stuff, watch Person of Interest handle the street-level crime that the government's less concerned about. Yeah, you, BUSH. Wait, it's not him any more? It's the guy with the ears? Ed

Defining moment: Reese sets up his rifle on the car bonnet while a jumpy Finch judges the range of the shot at the speeding car on a collision course with them. "What if you miss?" Finch asks, frantic. "Wouldn't know," comes the reply. "Never have." He doesn't.

Read our Person of Interest review from earlier this year 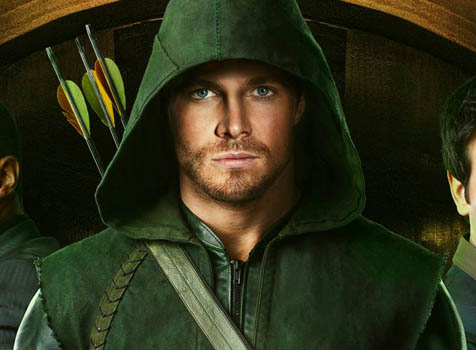 You can keep your gritty character studies, your slow-burning descents into life as a vicious drug kingpin and your commentaries on period gender politics. Show me a guy in a silly costume fighting crime by night and I'll show you my new favourite TV programme – no matter how lame the rest of it is.

Shipwrecked and marooned on an island for five years, rich and spoilt Oliver Queen is eventually rescued and returns to home charged with a mission to fulfil his father's dying wish: to right his wrongs and rid his city of the corrupt businessmen in control. Good thing that, in those five years, a mysterious dude taught him how to be an awesome fighter and skilled archer, eh?

Outside of the superheroics and the island flashbacks, the rest of the show consists of the kind of rich people's relationship drama that wouldn't look out of place in Gossip Girl. This is beside the fact that most of the actors look like they were cast more for their ability to model than to actually ... y'know, act. Or, in the case of disgustingly buff star Stephen Amell, to be able to conduct the gruelling training exercises that make up so many of the show's montages himself.

But all of this adds up to a show that looks great – it's slick, glossy and full of attractive people. More important though is its true trump card: it's fun. At a time when everyone is lauding any show that's 'brave' enough to concentrate on character nuance rather than any real action, here's the antidote: a shadowy guy in a green hood firing arrows at gun-toting criminals while doing a backflip. Matt

Defining moment: Addressing the most prevalent plot hole in every superhero story. Isn't it suspicious that The Hood starts appearing at the same time as Oliver returns from the island? Luckily, getting arrested is all part of his plan, allowing his newly-hired accomplice to don the costume and throw everyone off the scent of Oliver's no-doubt-expensive cologne. 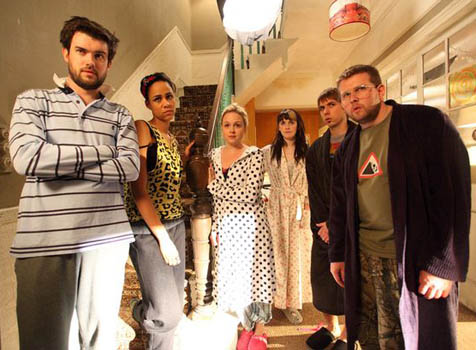 Sitting nicely between The Inbetweeners and Peep Show, and boasting the same level of smut and wit, Fresh Meat has been one of the funniest, cleverest and most well-written, well-observed shows of 2012. Quite the year for writers Sam Bain and Jesse Armstrong.

With two series in the bag, the characters have all come into their own and each become integral to the plot, all bringing something special to the student house. But series two is really centred around Jack Whitehall's posh public schoolboy, JP, who overcomes the biggest personal problems of the gang. Thankfully he's also the funniest character in the show. "Welcome to your first bante-natal class. I'm your tutor, Bantonio Banteras." Rob

Defining moment: After his father dies and his mum sells the family home, JP is left feeling totally lost. So his desperation and pleas to keep his student house together are perhaps the most heart-warming moments in the series.

More:  End-of-year-lists  Arrow  Boardwalk Empire  Breaking Bad  Derren Brown  Dexter  Elementary  Fresh Meat  Friday Night Lights  Girls  Homeland  House  Mad Men  The Newsroom  Peep Show  Person Of Interest  Red Dwarf  Sherlock  The Thick Of It  Veep  The Walk
Follow us on Twitter @The_Shiznit for more fun features, film reviews and occasional commentary on what the best type of crisps are.
We are using Patreon to cover our hosting fees. So please consider chucking a few digital pennies our way by clicking on this link. Thanks!
Next Page »